You Have To Check Out This Epic Supreme Court Jeopardy! Fail 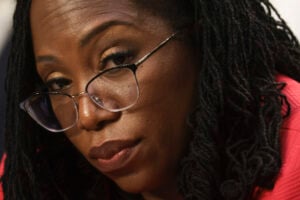 If you’ve ever wondered if you’re smarter than three Jeopardy! contestants — in the Tournament of Champions, no less — the answer is yes. Yes, you are. This isn’t some affirmation bullshit (though you *are* good enough, smart enough, and doggone it, people like you), but based on evidence from last night’s episode of the syndicated game show.

Because in the ToC, the contestants were asked this incredibly easy question that anyone who follows the Supreme Court or politics or even just current events should 100% know. And yet, not a single contestant — Amy Schneider, Tyler Rhode, and Maureen O’Neil appeared on the episode — rang in.

I don’t understand why this is so tough for the contestants — it’s not like they asked them to spell Ketanji (not that the spelling is particularly difficult).

Excuses for this epic fail abound, with some speculating that, given the category “3-Named People,” contestants didn’t know the “Brown” in Ketanji Brown Jackson. Or that the legal world is in its own isolated bubble, or that they assumed the first Black woman on the Court must have happened longer ago. All of which strikes me as some pretty weak sauce.

At least one of the contestants apologized for the gaff.

That triple stumper stung, but with the category being “Three Named People”, you usually have to list all three names – after the game, Amy, Maureen and I discussed that we all could pull 2 of the 3… not good enough – sorry Justice Jackson! #Jeopardy #JeopardyToC

The episode also featured another Supreme Court triple stumper (though not as egregious the KBJ brain fart). No one was able to answer in the category Supreme Court case, “Dobbs v. this city’s Women’s Health Organization overturned Roe v. Wade.” Which everyone reading Above the Law — or following the midterm elections — knows is Jackson, Mississippi.

I guess “Jackson” just proved too difficult to remember for this question too.

Eagles report cards through the first half of the season: Offense edition

Crypto Market Drops Back Into Extreme Fear As Crash Continues