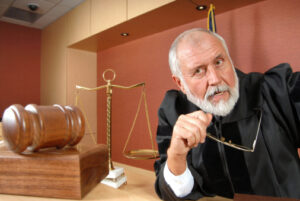 There is much talk about judges avoiding even the appearance of impropriety. Judges have a serious reputation to uphold — apparent missteps can cast doubt on the field. There is one thing worse though: actual missteps. See, that’s the weird thing about the rule of law. Even the enforcers of it are subject to it.*

A U.S. appeals court has affirmed the conviction of a former Brooklyn Supreme Court judge found guilty of obstructing a federal investigation—on the same day she was officially disbarred.

Come on, Judge, you know that’s not proper behavior. If you want to make money on the bench, do what the other federal judges do and hear cases where you have a financial stake in the outcome! There is no need to reinvent the wheel.

At trial, federal prosecutors accused Ash, the former board chair of the MCU, of deleting incriminating text messages and emails at Wong’s instruction and later lying to investigators as they probed Wong’s actions.

During their case, the government told jurors she received special “perks” for helping Wong—including charging the credit union for overseas travel and living expenses—yet never reported the gifts and additional income to the state.

Absolutely heinous. Another example of wheel reinvention. If you wanna secret away funds, just steal from the poor like Brett Favre. If law school and practice has taught us anything, it is that deference ought to be paid to the effective habits that came before us. Be this a sign to all future judges exploiting the legal system — do better.

*Unless of course you are a Supreme Court justice, or a cop, or a former president, or…

Likes and dislikes from Sixers' chaotic victory (and postgame) vs. the Bucks

NYDIG Analyzed The FTX Collapse And Its Implications. What Did We Learn?